During the summer, I took great pleasure in reading The Habit of Being: The Letters of Flannery O’Connor. Edited by O’Connor’s long-time friend Sally Fitzgerald, this collection of correspondences spans from 1948 to 1964, the last year of O’Connor’s life. The famed Southern writer carried on lengthy epistolary conversations with agents, friends, mentors, fans, and fellow writers, and this nearly 600-page volume represents only a selection of her missives. 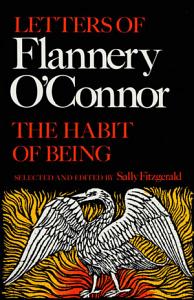 The letters are pleasant to read because they reflect everything from O’Connor’s everyday, practical matters (the price of peacocks) to her most profound (reflections on her writing and the workings of salvation). And then, as with so much of O’Connor’s writing, they are delightfully funny, containing passages that I re-read several times simply because they were so comical. In one place, for instance, she describes her peacocks “hollering in the tree every night” sounding as if the “whole chorus is being murdered slowly, repeatedly, formally” (218).

These letters clearly attest to the way that O’Connor delighted in the grotesque, that dimension of reality where what is warped and absurd reveals the deepest comic truths about the human situation. While the satirist may look at the world from the posture of mockery and derision, a comic writer like O’Connor draws out the ironic and humorous as one equally participating in the divine comedy of the fallen world. In the letters we learn that O’Connor had special fondness for those characters in her fiction like Hulga from “Good Country People” or Mrs. Turpin from “Revelation” precisely because they were a projection of herself rather than figures to be taunted from an elevated or privileged position. For the aspiring writer, the letters are full of good advice on the importance of a daily writing habit and attention to craft. For the critic, they offer insight to O’Connor’s literary influences, her sense of what her writing intends, and her wider philosophical and spiritual concerns. For the Christian, they give insight at once to the mystery of suffering and the mystery of faith.

Dr. Kathryn Smith is the director of the Masters of Arts and Teaching Program at Eastern University. She studied at the University of Dallas, and is now in the Greater Philadelphia area with her husband and three-year-old daughter.