February 01, 2020
“I’ve just recently finished reading Gene Wolfe’s The Fifth Head of Cerberus. Well, perhaps “finished” is entirely the wrong word. Once you read every word on the page, you’re really only just getting started. You may not believe me, but the book changes every time you put it down. When you re-read you’ll find new characters, a different story, and passages you swore weren’t there the first time. You’ll also find that what blindsided you in the first reading was written quite explicitly in the text all along—you just didn’t know what to look for.” 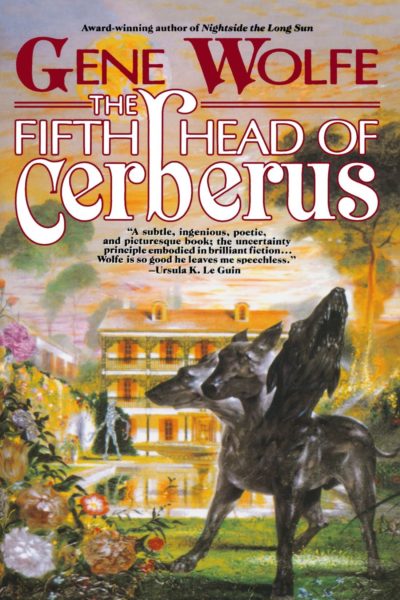 The Fifth Head of Cerberus was originally written as a single sci-fi novella in 1972. It takes place on the fictional binary planets of Sainte Anne and Sainte Croix, originally colonized by French-speaking settlers two hundred years before the events of the novella. Fifth Head is the memoir of our nameless protagonist, a boy who grows up in the house called Maison du Chien, named because of its statue of the legendary three-headed guard dog; or, perhaps the statue was placed there because of the name. Inside their home, the boy’s father performs rather inscrutable scientific experiments, though he is nothing like your typical mad scientist. In the course of his education, the boy learns the history of the aboriginals of Sainte Anne —a race of shapeshifters that were somehow wiped out by the original colonists of the sisterworld. Not everyone believes the standard history, however, leading some to ask the question: can a race of shapeshifters emulate another being so well they lose the ability to shapeshift at all? Perhaps the aboriginals never went extinct.

Wolfe’s publishers asked him to expand the work, so he wrote two additional novellas: “‘A Story,’ by John V Marsch”, and “V.R.T.”, both published together under the name The Fifth Head of Cerberus. In “A Story”, we find a legend ostensibly derived from indiginous lore, following characters with names like “Eastwind” and “Sandwalker”. It all seems to bear no connection to the first novella other than that it is written by an anthropologist met in Fifth Head. In “V.R.T.”, we follow an officer assigned to the legal case of a man stuck in a Kafkaesque prison. All the legal evidence is jumbled in a box, and we are forced to try and piece it together as best we can as we watch over the officer’s shoulder. Within the box are the desperate scrawlings of the prisoner, journals from his time in Sainte Anne, recorded audio interviews, and other scraps.

These three novellas form a kind of braid, at first fairly disparate strands, but upon each closer inspection the braid twirls and tightens. At Templeton, I learned an important idea communicated well by Italo Calvino: “A classic is a book that has never finished saying what it has to say.” Or, as one of our great professors told us: “There’s no time to read all the books, just the great books more than once.” The Fifth Head of Cerberus may not be a capital-c “Classic”, but it is eminently re-readable. Its primary themes are those of identity and memory—how better to tell this story than by a book that itself can shapeshift every time you look away?

Micah Skinner graduated from the Templeton Honors College in 2018. He earned a degree Mathematics and minors in Political Science and Astronomy, and is currently in an engineering masters program at Villanova. When he’s not annoying his friends by referencing C.S. Lewis, he spends his free time accumulating rust on his Hebrew vocabulary, reading fantasy novels, and pursuing laughter wherever it may be found.