It’s a Wednesday night, and graduating seniors Abigail Stevens and Jesse Whiteman are tired and stressed out. The following evening, they’ll be on stage for Eastern’s Shark-Tank competition, and they’ve just spent the last several hours working on their business proposal. As we sit down in the Jammin Java for this interview, I promise them I’ll try to keep it brief. 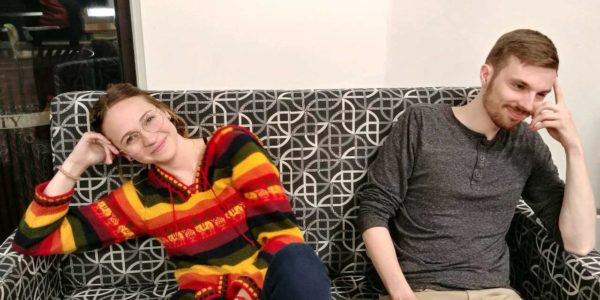 When I ask Abby and Jesse to describe their most formative experience as undergraduates, they both talk about their semester abroad. As I listen to them share why their semester away was so influential, I realize that it makes perfect sense. The Templeton motto says that with gifting comes responsibility: the classroom helped to develop Abby and Jesse’s gifts, but it was the semester away that taught them about their responsibilities to use that gifting.

Jesse confesses that he didn’t put in a lot of effort as an underclassmen. Spending a semester in Malawi opened his eyes to the staggering injustices of the world. He notes dryly that it’s a little hard to be content with abstract discussions of Plato’s Republic after living in Malawi. Nevertheless, he does appreciate how the Honors College has served as a mental sounding board, giving him new ideas and unique perspectives for addressing complex issues. Abby calls her experience in Templeton a “workshop in listening,” and notes that the college has taught her how to have a conversation without the desire to win. But she stresses that it was her time in Chile living with twelve Latina women (“who didn’t really like me for the first three months”) that she learned how to blend confidence in her ideas with authentic humility. Abby says one of the hardest lessons she learned during those six months was that “my opinion don’t always matter.” And she pushes against the idea that school is all about “getting out what you put in.” Approaching school from that mindset, she explains, means that “it’s still all about you, and what you’re doing, and what you’re getting out of it.” In contrast, the question that energizes both Abby and Jesse is “how do I contribute to something beyond myself?”

“In the last couple months, Abby and Jesse have been working hard to save Eastern University. As a culminating project in their economic development major, the two have helped create a strategic plan for the university, which they presented to a room of about thirteen people, including President Matthews, all of the Vice Presidents, the Provost, the Vice Provost, etc. “All the important people were there. And it went well,” they told me, smiling. “Our school’s leaders made a lot of time to listen to us, which we really appreciated.””

I asked how the two got involved with working on this strategic plan. They explained that in their economic development capstone class, Dr. Socci told them: “I’m gonna get rid of a quarter of your assignments. And as a group, you’re gonna use your education and apply it to the university.” Jesse explains that he was appointed leader of the group (“white man was appointed leader,” Abby quips) but that it was very much a team effort: “We offered a student perspective on the strategic direction of the university. We focused on stewardship, and said we need to encourage the university to support our faculty, our students, and the relationships.” Abby specifically mentioned their emphasis on fostering a “culture of stewardship” that is rooted in Eastern’s commitment to faith, reason, and justice. “We also warned against adding a football program,” Jesse said, before adding, “don’t put that in…wait, no, you can.”

In addition to their collective work, Abby and Jesse have distinguished themselves in other ways. Abby was recently awarded a research grant from the Center for Public Justice following her appearance at the Justice Conference in Chicago last September. For this grant, Abby focused on the issue of mass incarceration, animated by the question of “how can our communities extend radical hospitality to returning citizens?” Abby wrote a culminating paper for this project. The final paper was supposed to be 10 pages. It ended up being 40. “There were some graphs in there so…” she laughs. More recently, Abby’s research has centered on how to provide affordable housing in Philly.

Jesse serves as SGA Treasurer, and he recently fought to ensure that our donations as seniors to the senior gift will go toward creating a wheelchair accessible bridge on the pathway between the baseball and softball fields. Regarding his work on this project, Jesse explains that “people care about this community and want to see it last, and see it become better and more welcoming. But everyone is caught up with the thing they have to focus on in the moment. When we step outside of ourselves, and work together with others, we can actually create a lot of meaningful change.” As part of his major, Jesse has also researched how to make businesses more socially responsible and how to build strong public-private partnerships to advance the common good.

It’s not yet clear where Abby and Jesse are headed in their post-Eastern careers, but because I’m confident in who they are as well-formed people, I am also confident that the work they do will matter greatly. I have learned so much in these last four years simply by listening to these two friends and watching how they live out their values. The Templeton motto is a good one, and I am so thankful for the ways that Abby and Jesse embody it.

Oh, and about that Shark-Tank competition? Let’s just say that the two are graduating with some “disposable income.”

Anthony Barr is a senior studying history, literature, and Orthodox thought and culture. He frequently writes for Ethika Politika, University Bookman, and Circe Institute, and has done research on political theory, education policy, and civic and moral virtue for various nonprofits, businesses, and independent publishing companies. In his spare time, he enjoys reading poetry and playing ping-pong.