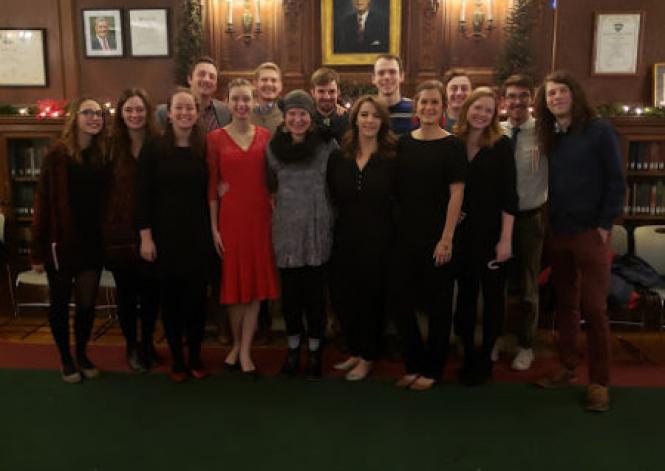 The Cohort of 2015 poses for a photo after the annual Templeton Christmas party.

The transitional period from life at Eastern University to life after graduation is a unique and intriguing space to occupy. Luke Megonigal is currently in such a place as he anticipates the transition from student to graduate. He was kind enough to share his reflections on his time here as well as his hopes and plans for post-graduation.

When asked to reflect particularly on his experience in Templeton, Luke admitted that the first three semesters were the most difficult, yet also the most formative. Coming from a public school, Luke recalled the excitement that he felt in the newfound freedom to discuss matters of truth as they relate to Christian faith, theology, and tradition. He was excited by the way the classical texts invited him into a conversation about what is True. It would follow then that Luke’s favorite text was The Song of Roland, both for its Epic literary genre and its accessibility, allowing him to begin grappling with matters relating to the Good Life.

When asked what he might say to his “freshman self” now that he has nearly reached the end of the Templeton curriculum, Luke provided some insightful responses. First, he advised, make conversation your leisure and engage with your classmates while you are reading great texts together and can afford the time to discuss, debate, and explore meaningful questions. Second, have fun engaging with the ideas and refining your thoughts as you construct your papers. Finally, make sure that you allot yourself space outside of class to make the personal connections that the texts often inspire. This, Luke found, was particularly beneficial with the help of Paul Charles, one of his mentors. As someone who had completed the program, Paul knew the topics and questions being faced, and could carry the conversations beyond the classroom into the real world.

As Luke and I moved from reflection to anticipation, I asked what he’s thinking now that he has completed seven semesters and  has only one left to go. Luke hopes to secure an internship for this upcoming semester, motivated by a competitive job market where experience is usually required in addition to a degree. Many of his peers are making similar efforts, Luke says, as they labor to attain viable employment prospects and credentials. Furthermore, expressing concern over graduate student loans, Luke hopes to get a TA position at Villanova where he will be completing his graduate degree in Mechanical Engineering. Such a position would assure that at least half of Luke’s graduate degree is subsidized by Villanova. This again is representative of similar thoughts that occupy the minds of current seniors as student debt continues to mount.

The final semester is not totally consumed by anxiety over employment options, grad school, and student loans. Luke is looking forward to courses that will afford him the opportunity to reflect on his time at Templeton and in the Math department. Both the honors capstone and math-philosophy capstone courses are expected highlights that will top off Luke’s undergraduate academic career. As many of our alumni already know, the Honors Capstone course will allow Luke and his cohort a chance to gather together and reflect once again on what it means to live a good life. Since the entire cohort had the Good Life course their first year, they will build on this foundation to examine how they will practice a good life in their myriad of pursuits after graduation. The math-philosophy capstone will allow Luke to flesh out the connections between math and theology that have been percolating in the back of his mind since high school.

Finally, Luke discussed the three things that he desires most for his cohort after graduation. First, he hopes that they will each remain oriented toward having good conversation, no matter what sphere of life and work they end up in. Second, he hopes that self-examination will not fall out of practice as life picks up pace, degrees are awarded, jobs are found, and weddings are celebrated. And above all, Luke hopes that his cohort is able to maintain some degree of friendship. Friendships in Templeton, centered on goodness, truth, and beauty, mean the world to Luke, given that those fostered in Templeton would be difficult friendships to lose.

Thank you Luke, and best of luck to all of our seniors.

Ben Reichner, Cohort of 2016, is a Templeton Scholar majoring in Social Work. Passionate about social justice, Ben also volunteered to help with our Summer Scholars program and is a Recruitment Assistant for the Honors College.